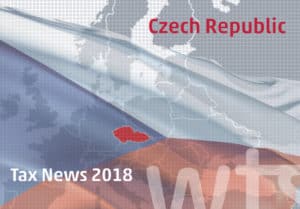 The Income Tax Act has undergone the most significant changes. Several measures are proposed to prevent tax avoidance in connection with the transposition of the EU Anti-Tax Avoidance Directive (ATAD).

The amendment – mainly aimed at major corporations – include the following:

As the above changes should be implemented into Czech law by the end of 2018, the Chamber of Deputies is expected to make efforts to meet the proposed effective dates.

The 2019 tax package for the Czech Republic also affects corporations paying dividends, royalties, interest or other income that is subject to withholding tax under Czech law but are exempt from tax, for example, under a bilateral double tax treaty.

Henceforth, these exempt payments shall be reported to the tax administration on a monthly basis if such income paid to one non-resident exceeds CZK 100,000 (roughly EUR 3,800) per month. In certain cases, applications for exemption from this notification obligation may be filed.

To put you completely in the picture, it should be noted that the originally proposed changes to the taxation of natural persons have not been adopted. Thus, the super-gross salary concept, the uniform tax rate of 15 % and the solidarity tax increase continue to apply.

Amendment to the VAT Act

The tax package also affects the VAT Act by which the EU directive governing electronic commerce and vouchers and the determination of the tax base for virtual currency payments (such as Bitcoin payments) is being implemented. Moreover, the amendment should lay down more detailed rules for the calculation of the right to partial tax deduction, increase the possibilities for claiming tax deduction upon registration for VAT and govern penalties related to control statements.

Amendment to the Tax Code

As part of the tax package, the Ministry of Finance proposes that the prohibition of abuse of law is explicitly included in the Tax Code. This principle has so far been applied only on the basis of the Czech courts’ case law since there has been no explicit reference to it in tax legislation.

An abuse of law occurs where there are no proper financial reasons for a transaction since its main purpose or one of its main purposes is to gain a tax or other advantage contrary to the spirit and purpose of the tax legislation. The burden of proof regarding the non-existence of financial reasons for a transaction shall lie with the tax administration.

Click here if you want to read the original article on the homepage of WTS Alfery, the exclusive representative for the Czech Republic of WTS Global.

If you are interested in more news about taxation and legislative amendments in the Central and Eastern European Region, please feel free to sign up for our newsletter!

Amendment to the Czech Construction Act has not met all expectations

Tax and Investment Facts in the Czech Republic 2017