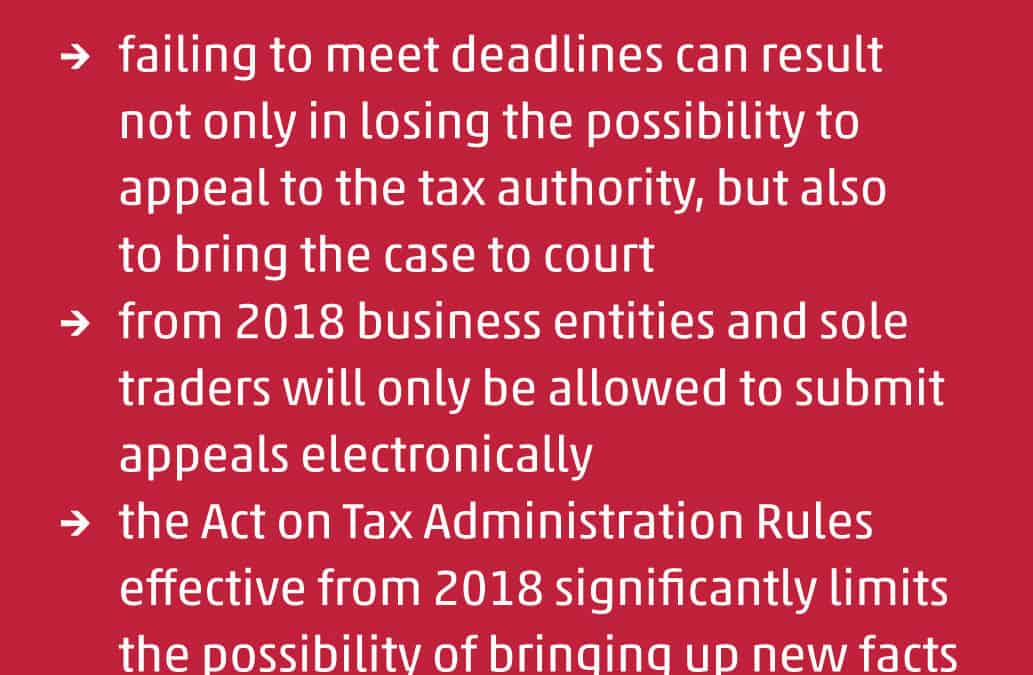 In an earlier article we reviewed the rules of legal remedies, including appeals in general. The Hungarian Act on Tax Administration Rules effective from 2018 reformulated the rules of appeals to some extent. I will cover this below, as well as the fact that from 2018, business entities and sole traders are only allowed to submit appeals electronically.

What purpose do appeals serve, and what are the deadlines?

Appeals are the most fundamental tool for seeking legal remedy within the tax administration system. An appeal and the supporting evidence can be filed within 15 days, or in the case of a retrospective tax assessment, within 30 days of notification of the written decision. The same deadlines apply for the electronic submission of appeals too. An appeal deadline shall be considered met even if the appeal was submitted on time but not to the competent authority.

How much do appeals cost?

In what respect does the digital transition affect appeals?

From 2018, those obliged to handle administration electronically in Hungary (business entities, sole traders) must submit their appeals via e-Papír (available only in Hungarian) on the internet.

Appeals, the gateway to court procedures

When considering possible legal remedies in the Hungarian tax system, it is worth taking into account that for decisions subject to appeal, a public administration lawsuit may only be launched if the appeal was submitted by the taxpayer and it was ruled on in a legally binding way by an appellate tax authority.

Can a new fact or circumstance be referred to in an appeal?

Previous rules have essentially allowed new facts or circumstances to be brought up in an appeal. By contrast, pursuant to the Act on Tax Administration Rules effective from 2018, both in an appeal and in any procedure initiated based on appeals, it is not possible to bring up new facts, or refer to new evidence which the taxpayer was aware of before the first-instance decision, but refused to present or refer to, despite being called upon to do so by the tax authority.

What are the dangers of appeals?

Supplementing facts at the second instance

Compared to earlier regulations, the new Act on Tax Administration Rules sets forth more detailed rules for supplementing facts in appellate procedures in Hungary. It defines a specific deadline of 90 days for this, starting from receipt by the first-instance tax authority of the notification from the appellate tax authority, and this period does not count towards the deadline for the legal remedy procedure. The new provisions, including the ones limiting reference to new facts or evidence, will most probably reduce the number of repeated procedures.

Our experts are familiar with and use the amended Hungarian rules of appeal on a daily basis. Therefore we recommend you turn to us as quickly as possible if your company is facing a tax inspection. We undertake the case-by-case preparation and administration of appeals and other submitted requests, and we can also provide full-scale representation services once we receive an engagement letter. For complex tax inspections in Hungary we really recommend you engage experts to monitor and help proceedings right from the beginning.